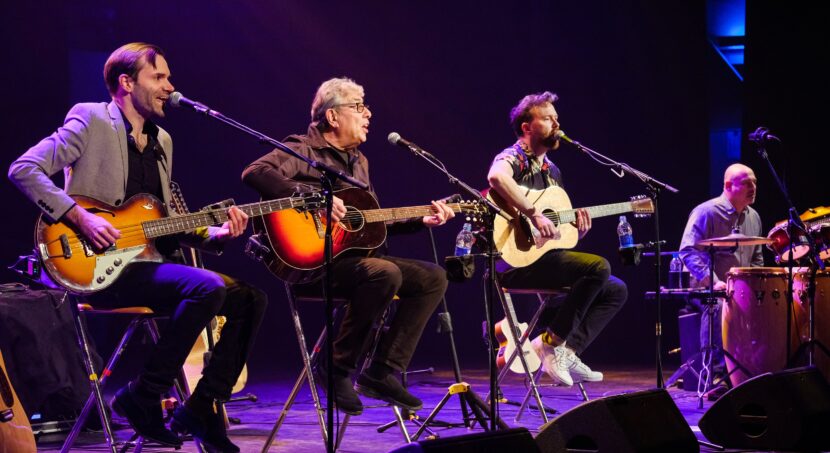 ABOUT THE GREAT SONGWRITER… GRAHAM GOULDMAN!

Graham Keith Gouldman, born 10 May 1946 in Manchester, is an English singer, songwriter, and musician. He has been the only constant member of the amazing art rock band 10cc!

Graham Gouldman is One of the Greatest Songwriters in the world with many hits and lovely songs!

Graham was given his first guitar at the age of 11 and started playing with local bands at 15. He received early encouragement to develop his musical talent from his mother Betty and father Hymie, who also contributed with suggested lyrics and song titles.

Graham played with various Manchester bands before forming in the year 1965 The Mockingbirds (with Kevin Godley on drums), and when the record label Columbia rejected Graham’s first single composition for the band, it turned out to be a blessing in disguise. The song, For Your Love, became a huge hit for The Yardbirds.

Working by day in a men’s outfitters shop and playing by night with his semi-professional band, Graham went on to write a string of hits, such as Pamela, Pamela for Wayne Fontana, For Your Love, Evil Hearted You and Heart Full of Soul (The Yardbirds), Bus Stop and Look Through Any Window ( The Hollies ), No Milk Today and Listen People (Herman’s Hermits), and Tallyman for Jeff Beck.

In 1972, along with Eric Stewart, Kevin Godley and Lol Creme, he formed 10cc and enjoyed a string of Top 10 hits, including three No 1s – Rubber Bullets, I’m Not In Love and Dreadlock Holiday – along with Donna (No 2), Art For Art’s Sake and Good Morning Judge (both reaching No 5), The Things We Do For Love and I’m Mandy Fly Me (6), and The Wall Street Shuffle (10).

It’s the enduring popularity of these tracks and Graham’s love of playing songs acoustically, that led to the formation of Heart Full of Songs, which features many of these songs, Bridge To Your Heart (from Graham’s time in Wax with the late Andrew Gold) and other compositions including film sound tracks and material from his acclaimed solo albums Animalympics, And Another Thing, Love And Work and Play Nicely And Share.

Here is the List with the Amazing Songs Written Solely by Graham Gouldman:

And here is the List with the Amazing Songs co-written by Graham Gouldman :

The Hollies – Look Through Any Window.

Wax- Bridge To Your Heart- Wax,– Right Between Your Eyes.

McFly- I Got You. Kirsty McColl- Stalking A Fan. Gary Barlow– Stronger and Paul Carrack- The Way I’m Feeling Tonight.

΄΄Ladies and gentlemen, boys and girls, welcome to www.10cc.world, the official website of the 10cc touring band.

I hope you’ll enjoy clicking around and finding out lots of info about us, all the news, our tour dates and our biographies, after which you might care to do a bit of shopping.

I’d love to hear from you with any comments, observations or criticisms. All will be welcome.

We’re all looking forward to meeting you when we next play in your part of the world, or should I say ’10ccworld’΄΄.

AN INTERVIEW WITH… GRAHAM GOULDMAN.Athenscalling.gr: Hello Graham from Athens Greece! I believe that it is a great time for Athenscalling.gr chatting you! Where are you now and how pass all these crazy Pandemic COVID-19 days?GRAHAM  GOULDMAN : I’m at home in London at the moment. We are in the middle of a Heart Full Of Songs tour which is an acoustic show that I do featuring songs that I’ve written or co-written from over six decades. I spent the pandemic writing new songs and recording. I found it a very creative time but I’m very glad to be back on the road now.Athenscalling.gr: At first tell us please, about your best memories from the past until today, with the Mockingbirds, about your debut solo album in the year 1968 ΄΄ The Graham Gouldman Thing ΄΄ and with 10cc.GRAHAM  GOULDMAN : I have so many great memories. I suppose the most important one was having my first hit with the Yardbirds having written ‘For Your Love’ for them in 1965. Also one of my first bands is the Mockingbirds which were very important to me. In 1969 I recorded The Graham Gouldman Thing which is still one of my favourite albums. Regarding 10cc, we had three number one records, which I think was a great achievement.Athenscalling.gr: Living in the past, do you remember your first teacher in music and your first album that you bought?GRAHAM  GOULDMAN : I never had a music teacher. I am completely self-taught. The first album I bought was ‘Please Please Me’ by the Beatles. That album still has a huge influence on me.Athenscalling.gr: You have written a lot of songs and all of them hits! On what occasion do you create the music and the lyrics of your songs?GRAHAM   GOULDMAN: There is no particular way that I write songs, sometimes I may have a title or some lyrics but quite often I sit down with the guitar and just start messing around until something interesting happens.Athenscalling.gr: In 2018 you were invited by former Beatles’ drummer Ringo Starr to join his All Starr Band for tours of Europe and the USA, during which the band played three 10cc songs. How were your feelings?GRAHAM   GOULDMAN: I loved playing with Ringo and the All Starr Band. He was fantastic to be with and it was a brilliant experience.

Athenscalling.gr: ‘Modesty Forbids’ is your first album in eight years, since the album ‘Love and Work’, with 11 songs! Who is your best song and about the picture of the album, I like it but why put the black big line in the peacock eyes?GRAHAM   GOULDMAN: It’s very hard to pick a favorite song from this album but, if I had to choose, ‘Standing Next To Me’ and ‘That’s Love Right There’ are two of my favorites. Regarding the album cover the Peacock is not known to be a modest creature hence the idea of blacking out its eyes makes him anonymous, therefore he’s being viewed in a modest way.Athenscalling.gr: You are the only constant member of the band 10cc and I will ask you…what happen about ‘The Ultimate Greatest Hits Tour΄GRAHAM  GOULDMAN : The Ultimate Greatest Hits Tour will be just that, including some of our favorite album tracks and tracks that have been requested by our fans over the years.Athenscalling.gr: Any new album from 10cc.?GRAHAM   GOULDMAN: 10cc as it exists now, with me as the only original member, is purely a touring band. I have no plans to record an album of new material under the name of 10cc.Athenscalling.gr: O.K. Do you know something about Greece?GRAHAM   GOULDMAN: I have visited many of the Greek islands and have a great love for your beautiful country.Athenscalling.gr: And now…Your message please to the people.GRAHAM  GOULDMAN: Thank you for supporting 10cc over the years. I feel very lucky to have been able to make music for most of my life and look forward to maybe playing in Greece one day.Athenscalling.gr:Thank you Graham,your interview it is a great gold page for us  GRAHAM GOULDMAN : Thank  you.