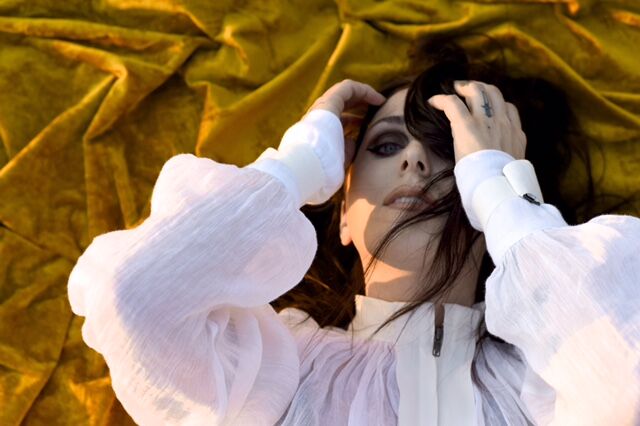 Athens Calling : Hi from Athens dear Chelsea Wolfe. You should know that we like very much your music and all of your songs.
CHELSEA WOLFE: Hi! Thank you, that is wonderful to hear.
Athens Calling : In fact, how we can characterize your music, I mean about the music genre?
CHELSEA WOLFE: I inhabit a few genres, and within those genres I like to play and experiment, so I think it’s difficult to define, but at the same time there are many of my songs that could be labeled “rock” or “folk.”
Athens Calling : I saw a reference in your bio to your father was in a country band having a studio. This was good for you and your progress on music ?
CHELSEA WOLFE: Growing up, both of my parents were artistic people – my mom with painting, sewing, and gardening, my father with music. He is great at harmonies, and I think I picked up that ability up from him as I instinctively harmonize with other singers. Seeing and hearing my dad’s band practicing for shows or learning Fleetwood Mac songs was impactful on me.
Athens Calling : What is the reason , that you write the lyrics and the music of your songs?
CHELSEA WOLFE: As a child I started writing very naturally. When asked what I wanted to “be” when I grew up, I’d always say “a poet.” I understood the world in a certain way, and I was an empathic person – the type that would cry when I saw another person cry. I couldn’t separate myself from the emotions, strangeness and sadness of the world, so I channeled it into writing, to try to make some sense of it all. Since my father had the home studio, I was exposed to recording equipment early on, and one day I decided to try to make one of my poems into a song, so my father helped me with a simple setup, and I recruited my sisters to sing backup. I went from being a baby poet to wanting to be a songwriter. From there, it’s just always been something I do, and as I made the transition into a career musician in my mid-20’s, I set my focus on making albums as complete thoughts and artistic visions.
Athens Calling :  We would like to tell you, that all your songs looks like short films So I have the opinion that you are a music director. Do you agree or not.
CHELSEA WOLFE: That’s lovely to hear. I approach music in a cinematic way because it indulges my dramatic side. I don’t like drama in real life, but I do love to get a bit theatrical within art and music.
Athens Calling : ‘’Hiss Spun’’ (2017) is the title of your new album. How did you come up with the title of this album?
CHELSEA WOLFE: There are a lot of small words with big meanings on this album: vex, hiss, scrape, spun. I was messing around with putting the words together and loved the flow of “hiss-spun.” To say it forces you to slow down a little, and I like the animalistic sound of “hiss.” Hiss also represents beautiful white noise and Spun represents the addiction and the withdrawal.
Athens Calling : How much time did you need to prepare ‘’Hiss Spun’’ ?
CHELSEA WOLFE: I like to enter the studio with a fully demo’s  album, so there’s always a couple years of work before I get to that point, writing, producing and creating with my band mates.
Athens Calling : Which one of the 12 songs is your favorite and why ?
CHELSEA WOLFE: “Scrape” was an exorcism I needed.
Athens Calling : I must tell to You that my favorite my best song from this album is the ‘’Twin Fawn ‘’ and if You want tell us the story about this song.
CHELSEA WOLFE: Thank you. That song is about what it’s like to be in love with an addict.
Athens Calling : You have fifth studio albums and we would like you to tell us which one that you love most ?
CHELSEA WOLFE: I don’t know if I have a favorite, but I do think putting out “Unknown Rooms” was important for me. At the time I had so many acoustic songs that were floating around, unreleased, and Sargent House suggested that I pull them together to form an album. In that process I started writing some new acoustic/minimal songs and embracing that side of myself and my music. With Hiss Spun, I was embracing my more metal and rock n roll side.
Athens Calling: Tell us about 2018 tour, will you come to Greece?
CHELSEA WOLFE: I hope to come back soon!
Athens Calling: Thanks a lot for the interview and all the best in your musical journey many thanks with a big hug from Greece!
CHELSEA WOLFE: Much  love.
Share List