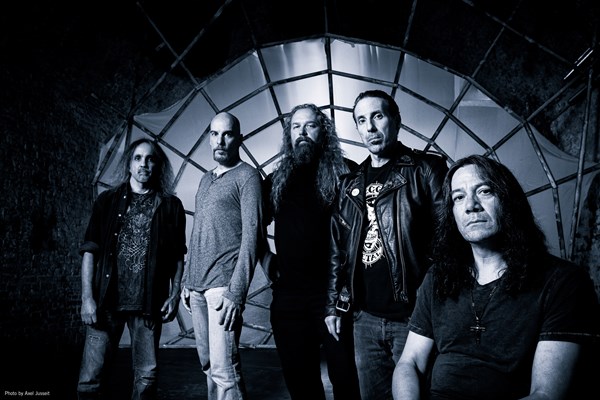 PSYCHOTIC WALTZ is back after 23 years, with a new amazing 5th album entitled “The God-Shaped Void”!

Also it is a great time for the music because US Progressive Metal pioneers and innovators PSYCHOTIC WALTZ return in full original line-up with their highly anticipated 5th studio album and first new music in 23 years.

“The God-Shaped Void” is the album of the year, with 11 great songs, straight into our hearts, producer Ulrich Wild and mixing, mastering by Jens Bogren!

“The God-Shaped Void” is the album, connects yesterday with today looking to the future… Many thanks for your music PSYCHOTIC WALTZ!

Before the end of the year 2020, it was the time for Athenscalling.gr Web Zine to take an interview with two amazing PSYCHOTIC WALTZ members!

Athenscalling.gr: Really I don’t know how to start chatting with two legendary artists of the music scene … I am so much happy… Devon and Dan welcome at the webzine Athenscalling.gr… Welcome PSYCHOTIC WALTZ! DEVON (PSYCHOTIC WALTZ): Well, thank you! I kind of don’t know what to say to that… That is a very kind introduction.

Athenscalling.gr: Crazy days, crazy times for all the people with Pandemic COV-19 where are you now and how passing?

DEVON (PSYCHOTIC WALTZ): I am basically in the studio nearly full time. I am doing a lot of vocal training actually. I am also fine tuning my studio infrastructure, and (as the evil scientist as always says in the movies) “soon my plan will be complete!!”

DAN (PSYCHOTIC WALTZ): Well, not much has really changed for me personally, other than we had to cancel our vacation to Disneyworld. PW of course had to cancel our Greek and European gigs that we had scheduled this year. We’ve rescheduled them all for next year, hoping that things get better by then. If things stay bad they might be pushed back again to 2022… who knows? Athenscalling.gr: … 23 years after, a new album from your band, it was bad or good for a band, specially for PSYCHOTIC WALTZ?

DEVON (PSYCHOTIC WALTZ): Are you asking if 23 years between albums is good or bad for a band? I guess it depends on the band. It doesn’t seem that long though. We are really lucky though, that so many people waited for us all this time. That so many people remember us, and love the band.

DAN (PSYCHOTIC WALTZ): We have a saying, “It is what it is”.  There’s no changing the past, but yeah, 23 years is a lifetime ago.  Literally.  So much has changed since the last album in 1996.  But I think for the band it was good.  Enough time has gone by and things have settled in everybody’s lives so that our 2011 reunion was perfect timing for us all.  The eventual songwriting for the new album just took longer than expected… we did a lot of revising!

Athenscalling.gr: “Devils and Angels” is the first single of your album . So I will ask you what do you have to say to Angels and Devils, If they were at the moment with us?

DEVON (PSYCHOTIC WALTZ): I believe that there are spiritual forces at work, and at play alongside humanity. Interwoven with humanity. The devils can only act through us, and enter us through our negative emotions. How rage can bring a monster out of each of us, maybe lets a monster in… Angels are just the same, entering through the light… through our love.

DAN (PSYCHOTIC WALTZ): Wow… interesting question.  I’m not sure, really.  I mean… what do you say to an angel or devil?  “How’s the weather?”   “How’s God doing these days?” I might ask if they could describe what’s beyond the edge of the universe.

Athenscalling.gr: Any story about the song?

DEVON (PSYCHOTIC WALTZ): I think it was the first song we finished since we got back together. I remember feeling like, “It’s still there.”

DAN (PSYCHOTIC WALTZ): Well, we chose to open the album with it because we all liked it, and felt it had a little bit of everything you could expect to find within the rest of the album. The ending too is quite powerful and always left me with the feeling of: “what’s next?”  Hopefully it gives the listener a desire to pay attention and listen to the rest of the album.

Athenscalling.gr: Let’s travel now, if you wanted it with the time machine in the past and I will ask you … Do you remember your first teacher in music?

DEVON (PSYCHOTIC WALTZ): Aside from my stepfather, who always had instruments around the house… he was a great Jazz horn player. I snuck his guitar out of the closet every day from when I was about 12. My first and only guitar teacher was a great guitarist named Thom Beebe from a heavy metal band from San Diego called Child. He looked a lot like Ritchie Blackmore, and played a Strat. I spent every lesson just learning songs by Hendrix mostly. I was about 13-14 years old by then.

DAN (PSYCHOTIC WALTZ): Yeah, it was my dad.  On an old acoustic guitar he taught me “Ghost Riders in the Sky” (Johnny Cash) when I was about 8 or 9.

Athenscalling.gr: Something other from the past … Any one lovely moments?

DEVON (PSYCHOTIC WALTZ): Once time, in the early days… when we just finished the Aslan demo, we, along with our artist Mike Clift dropped acid together and had a very interesting night indeed! DAN (PSYCHOTIC WALTZ): For PW moments, I would say the opening slot at the Dynamo Festival in 1991.  Everything was so new and magical to us then.  For personal lovely moments, the birth of my daughter and watching her grow up every day.

Athenscalling.gr: And now something for Devon … Do you like Ian Anderson?

DEVON (PSYCHOTIC WALTZ): Um… yes. I was mostly a Sabbath fan in high school, but the “Aqualung” album pretty much defined my musical ambitions.

Athenscalling.gr: And the other question is for Dan… Tell us Dan 5 of your best lead guitarists?

Athenscalling.gr: Again about “The God-Shaped Void”!…and your favorite song from the album?

DEVON (PSYCHOTIC WALTZ): I really like “The Fallen” (which may have actually been the first song we made since the reunion, come to think of it…). I love Sisters Of The Dawn, and All The Bad Men… In The Silence… Man, this is hard…

DAN (PSYCHOTIC WALTZ): Man, it’s hard to pick one… at the moment maybe the opening track.  Other times I’m partial to Sisters Of The Dawn, or All The Bad Men, really depends on my mood.

Athenscalling.gr: Difficult days for the world and very difficult days about all the  music scene, about all the music projects. Pandemic of COVID 19 makes all the bad things for the music and of course for all about the arts! No festivals, no clubs or Café Bub or Theater… We are leaving in Days off…So do you have any prediction for the future… any prediction… any light?

DEVON (PSYCHOTIC WALTZ): I can’t make any predictions. Not any good ones anyway. But I believe in humanity. I hope we all wake up in time.

DAN (PSYCHOTIC WALTZ): We will get through this just as humanity has done with previous plagues.  Concerts are going to be weird I think, or any mass gathering really.  But I think there will be a lot of long-distance album making soon.

Athenscalling.gr: These days a large department store in Greece has one great promotion about your album “The God-Shaped Void”. You know it that your band has many fans in Greece… Your message for your fans in Greece?

DEVON (PSYCHOTIC WALTZ): That sounds awesome! I would love to see that. I hope it’s still there when we play next century. I would like to say thank you — from all of us. We really look forward to the light at the end of this tunnel.

DAN (PSYCHOTIC WALTZ): We were lucky enough to meet many of our Greek fans back in 2012.  To them I say, “Thank you for being patient with us all these years, sorry it took so long to get there, but you are in our plans for 2021… or as soon as we are allowed back!”.

Athenscalling.gr: Thank you Devon … thank you Dan and all the best to the other members of the band… I believe that your 5th album entitled “The God-Shaped Void”… is the album of the year!

DAN (PSYCHOTIC WALTZ): Well that’s quite an honor to receive such a compliment. Thank you for that, and for still being interested in us all these years later!