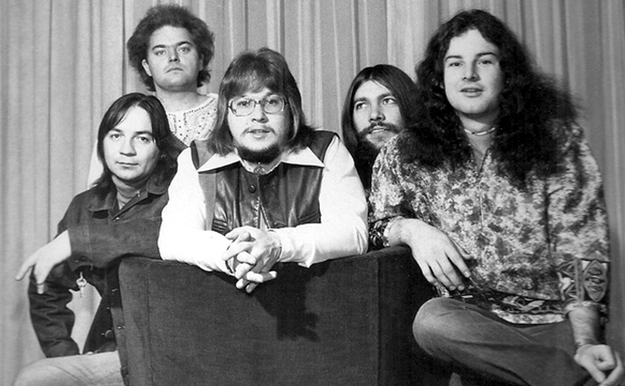 LEGENDARY BAND… THE GUESS WHO !
A legendary band…The Guess Who is a Canadian rock band, formed in Winnipeg in 1965. Initially gaining recognition in Canada, the group found international success from the late 1960s through the mid-1970s.
‘’Shakin’ All Over’’ was the debut studio album by the Canadian rock band and the hit song was…’’Shakin’All Over’’ of Johnny Kidd.
The Guess Who  is a legendary band with many hit singles,”No Time”, “Laughing”,           “American Woman”, “These Eyes”, “Undun” ,“No Sugar Tonight”, “Share the Land” and many others.
The band has continued to perform and record to the present day and at various times has included many well-known musicians, including Burton Cummings and Randy Bachman (of B.T.O) .The band formed as a garage rock band their musical style encompassed the pop rock and psychedelic rock genres.
Interview with Garry Peterson of The Guess Who! ATHENS CALLING: At the beginning I would like to say how much of a pleasure it is to be speaking with Garry Peterson,drummer and founding member of The Guess Who.  Thank you for your coming at Athens Calling G.R website. You must know that you are one of the most legendary bands in the world and in Greece you have too many fans.
GARRY PETERSON :  Thanks for reaching out to us.
ATHENS CALLING: The Guess Who stay alive until today with a new amazing line up! How do you feel with the new line up without the past members of the band?
GARRY PETERSON:  Love playing with the guys who are now in the band, these guys make walking out onstage and performing enjoyable once again.  The chemistry between the various members (both onstage and off) is great and that is translating into probably the best live show the band has ever had in its 50 plus years.   Not to mention that the band now has the confidence to undertake some ambitious future projects.
As for past members, while there is always going to be some nostalgia (especially for those members who have passed away); relationships do end, people do leave, and the band continues on as it has done for the past 50 plus years.
ATHENS CALLING: Two members of the legendary past they play with the new members in the band. Is there any change in your playing with the new members?
GARRY PETERSON:  Yes, absolutely!  We are fortunate to have some extremely talented individuals in the band who are bringing new ideas into the band and driving us forward.  Having been playing the drums now for over 65 years, these guys are an inspiration to perform with and motivation to continue working to perfect my craft.
ATHENS CALLING: Surfing the internet I saw your official website.I I admit that it is fantastic…with amazing  graphics . We would like to know for the creation of this  website please.
GARRY PETERSON:  I think that the website was originally created by a company called Hub Design out of Canada.  But the website is also ten years old and during that time we have had other people update parts of it, so it is now a mixture of creative people who have contributed to it.  We also have plans in the works to completely redo the website to coincide with the release of our new album later in the year.
http://www.theguesswho.com/
ATHENS CALLING: The last album of the band in the year 2009, was a live album with 16 song’s , named ‘’The Guess Who – In Concert‘’ do you have plans to release a new album?
GARRY PETERSON:  Yes.  In October of 2016 we spent about a week in Nashville, Tennessee at Blackbird Studio recording the tracks for our next album, which will feature all new original material.  The album is currently in the mixing stage with a tentative release sometime during the summer of 2017.If you are not familiar with Blackbird Studio, they are a world famous studio, where artists such as Taylor Swift, Jack White, Garth Brooks, Red Hot Chili Peppers, ect have recorded.
ATHENS CALLING: And now something else, a question for your hit song with the title ‘’American Woman’’. Tell us please what is the truth about the song lyrics, because the song’s lyrics have been the matter of some debate, often interpreted as an attack on U.S. politics . Is this “an anti-war protest song” ?
GARRY PETERSON:  The song was never an attack on U.S. politics, nor an “anti-war protest song”; but rather a commentary on the emotional imprint the social unrest we observed while touring in the U.S. between 1965-70 had on our Canadian perception of life in the States combined with a gratitude for where we came from.You have to keep in mind that we came out of Winnipeg, Canada, which is a fairly rural conservative community isolated out on the Canadian prairie, at a time when a person’s access to news was limited to newspapers, a couple TV channels, and radio.  We did not have the right here, right now, a million different streams of unfiltered information coming at you 24 hours a day, 7 days a week that the internet offers today.  Instead, we received a condensed version of the major news stories either on the evening TV news or would read about it in the paper the next morning.  Regional or secondary events would be buried farther back in the paper and if it was regional to somewhere down in the States, chances are we would never hear about it.So while growing up primarily in the 1950’s our perception was that life in the States was rather idyllic …..white picket fence, homes with big yards, 2.3 kids, dad going off to work in his three piece suit, mom taking care of the house in her nice dress, evening dinner with the entire family sitting around the table, and all that.  You could say we looked up to the States as sort of a big brother type figure.
Then we started touring in the States and were abruptly forced to see past the façade our perception had created by the sights of the inner city ghettos; the anti-war protests; homelessness; resistance to the Civil Rights Movement; these kids coming back from Viet Nam damaged mentally, physically, and spiritually; poverty; racial tensions which eventually exploded into riots; the hippie drug-fueled counter culture; ect.   So after experiencing all this on tour, we were grateful to be returning home to a more laid-back and conservative community; and this, in my opinion, is what inspired the song ATHENS CALLING: Now before we say goodbye to You,I would like to know us about ‘’The Guess Who Tour Dates’’.
GARRY PETERSON:  We keep a fairly active touring schedule of between 40 to 50 dates per year, mostly in the United States and Canada.  Dates can be found on our website, Facebook, Twitter, and we also submit dates to the Bandsintown app.
https://www.facebook.com/theguesswho
https://twitter.com/theguesswho
ATHENS CALLING: Thank you very much for what you said and you should know that we expect you to come in Greece for a concert?
GARRY PETERSON:  We would love to do a European tour at some point in the future and include a stop in Greece as one of the concert dates.
Share List