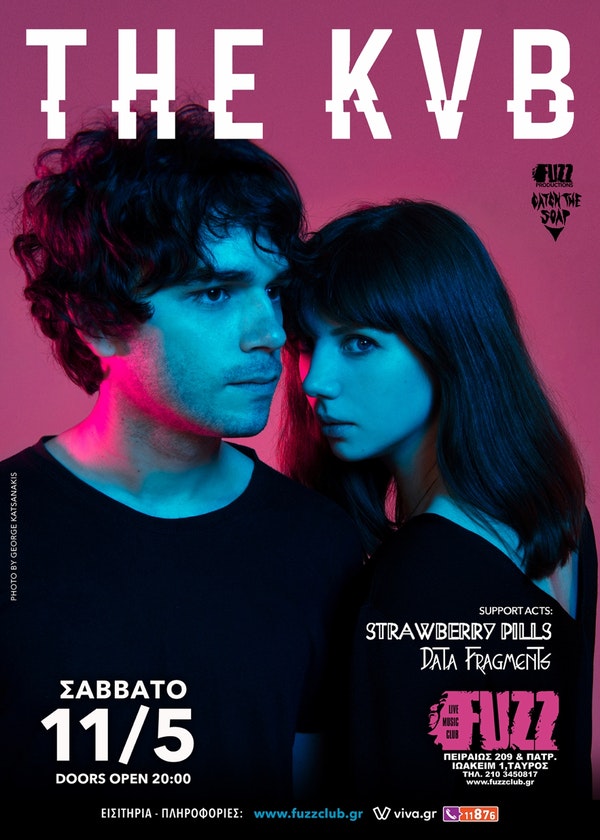 ATHENS CALLING: Hello from Athens, we are very happy, chatting with your amazing duo. Welcome on ATHENS CALLING G.R my dear friends!

ATHENS CALLING: We like your sound, your music, very much…but I think that, it is very difficult to describe it. So ask you, how can characterize your sound?

ATHENS CALLING:  What is the reason that you write the lyrics for your songs?

Nick(THE KVB):  The lyrics are usually based on my own experiences of the world around me, but I also like our lyrics to have multiple meanings, so that the listener can interpret them in their own way.

ATHENS CALLING: Six The KVB studios albums, which of them is your favourite?

Nick(THE KVB):  Our last album ‘Only Now Forever’ is our favourite. We had a lot of freedom while making this album and feel that it’s our strongest in terms of songwriting and melody.

ATHENS CALLING: Six months about your new studio album ‘’ Only Now Forever ‘’ and my opinion is that we have something new, a few degrees of separation from the KVB’s early days! What do you have to tell us about this album ?

Kat(THE KVB): We started work on it in January 2017 and worked on it throughout the rest of that year, in between touring. It is different to the early material in terms of production and style, but a lot of those older elements are still there in our opinion and people that have followed our project from the early days will see that progression and familiarity.  As we wrote and recorded in our Berlin flat, it allowed us to experiment a lot more and at any time of day. A lot of the new equipment also influenced the sound of the record. For example, the OB6 which features heavily on the album and also the Erebus, made by Athens-based synthesizer company Dreadbox which was used predominantly on the first single taken from the album ‘Above Us’.

ATHENS CALLING: What do you love most, than the two, to play at the studio or at the stage of the clubs and festivals?

Nick(THE KVB): The two are very different, so it’s hard to compare. For us, live performances are all about being in the moment and connecting with the audience on that occasion – when it’s all in sync it’s an amazing experience, but there’s always the risk in playing live that things can go wrong at any moment. That’s part of the thrill, and the euphoria from playing live is hard to beat. Being in the studio offers freedom to be creative and be able to develop something from nothing, which is always a great feeling.

ATHENS CALLING: What is your fondest musical memories. In your house or in your neighborhood, in your town or somewhere else.

Kat(THE KVB): Our fondest memories are of being able to travel together and play all over the world in places we’d never thought we’d visit.

ATHENS CALLING: Today we have many names in the music scene. Please give us the name of your favorite musicians- Groups or CD’s.

ATHENS CALLING: Have something to tell us about your future plans?

Nick(THE KVB): We’re currently in the process of working on new material for The KVB and other projects. We have an idea for a concept album or project, so we’ll see where that takes us. We’ll also be touring on and off again throughout this year to some new countries, and to some countries we haven’t been to in a while.

ATHENS CALLING: Before say good bye to your amazing duo …Tell us about your show at FUZZ live music club  Saturday 11 May. What do you have to show us?

Nick(THE KVB): Our live show has evolved since we were last in Athens. We’ll be presenting an immersive journey of songs from our new album, along with some older favourites all to brand new visuals.  Some of our first concerts were in Greece, so we always love playing there and looking forward to seeing some old friends.

ATHENS CALLING: Many, many thanks for your interview and all the best for your music plans …

THE KVB: Thank you!