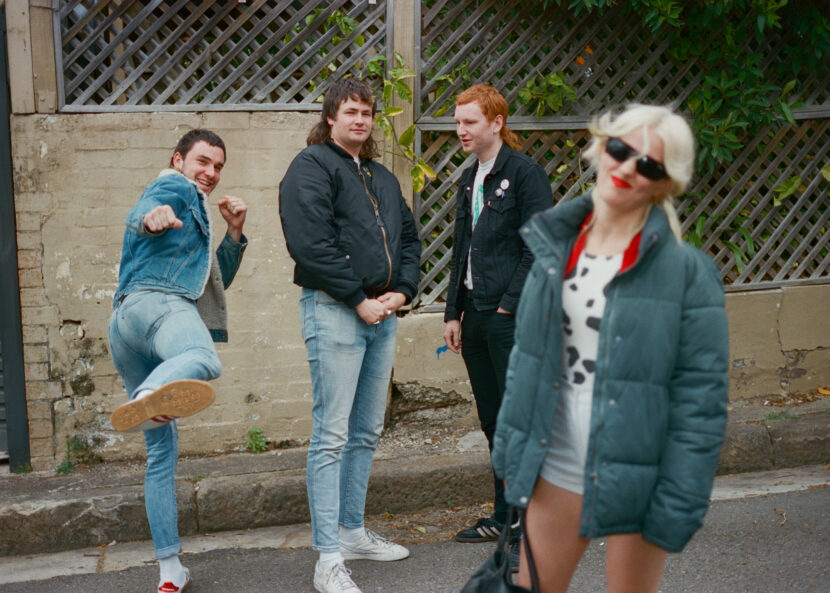 AMYL AND THE SNIFFERS, are an Australian rock band, is the really face of extreme music explosion based in Melbourne, Australia, consisting of hard-charming and sexy vocalist Amy Taylor, amazing drummer Bryce Wilson, the extra best guitarist Dec Martens and also with the bassist Fergus Romer, who replaced Calum Wilson.
The band was formed by housemates Taylor, Wilson, and Martens and former band member Calum Wilson (AKA Candy) in Balaclava, Melbourne. The four wrote recorded, and released their first EP,GIDDY UP, in a span of 12 hours!
After two EPs, GIDDY UP (2016) and BIG ATTRACTION (2017), the band was signed to Rough Trade Records in 2018, and went into the studio to record their debut album with producer and former Add N to (X) drummer Ross Orton.
The result was the self-titled Amyl and the Sniffers, which was released on 24 May 2019 and has received generally positive reviews including a 7.2 from Pitchfork and 4 out of 5 stars from NME and All music.
Also in the same year MOJO review of the year, include AMYL AND THE SNIFFERS their debut album, one of the 75 best albums of 2019, it was in No 16 position!
One year about, from their explosion sound of AMYL AND THE SNIFFERS debut album, we chatted online with the front woman of the band AMYL TAYLOR!

ATHENS CALLING GR: I must say to you that I like very much your song from the past in the year 2016. I mean ΄΄ Caltex Cowgirl ΄΄ ! I think that is a song with the other side of your band sound. So tell us, if you want it, the story of this amazing song!

AMYL (AMYL AND THE SNIFFERS): Oh thank you. I like that song too because It’s a bit more country and innocent. It’s about just feeling a bit uneasy within yourself and like a cheap disposable person, and being so exhausted that you just want to have a long sleep.

ATHENS CALLING GR: And about your influences?

AMYL (AMYL AND THE SNIFFERS): Yes! Heaps of influences, too many to list. Love X-ray Spex, The Runaways, The Plasmatics, ACDC, The Saints, Drunk Mums, Ausmuteants, Bru-C. The list could go on and on.

ATHENS CALLING GR: Your debut album ΄΄ AMYL AND THE SNIFFERS ΄΄ was in the hit list of 75 best albums of 2019 it was 16 th (MOJO REVIEW OF THE YEAR 2019) Tell us about this album!

AMYL (AMYL AND THE SNIFFERS): Yeah this was our first full length album. It’s a pretty high energy, very pub rock sound. it’s almost been a year since its come out I’m glad it’s going crazy.

ATHENS CALLING GR: And your favorite song of the album?

AMYL (AMYL AND THE SNIFFERS): Some Mutts Cant Be Muzzled

ATHENS CALLING GR: How do you love… LIVE AT THE CROXTON ?

AMYL (AMYL AND THE SNIFFERS): Hell yeha! it’s rough and raw to listen to. Which is what I like in songs? It reminds me of gigs and playing and being sweaty.

ATHENS CALLING GR: Just a little from the end of our chatting give please your message to all around the world to all the people about Pandemic Covid-19

ATHENS CALLING GR: All the best to your band, your sound make me a young boy thank you very much… and STAY HEALTHY- STRONG and SAFE!

*Editor note: Many Thanks to Photographer Ellen Virgona