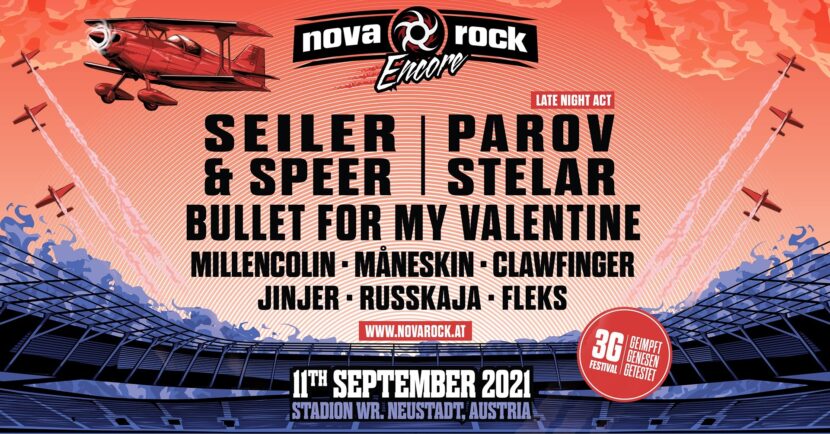 It was a big surprise for us the good news, that… NOVA ROCK ENCORE 2021, the amazing rock festival will take place on Sat, 11.September-Stadion Wiener Neustadt-Austria!

Yes it was a big surprise, because Athenscalling.gr believes that it is one of the biggest and best rock festival events on Planet Earth and, believe us, we are more indescribably happy about it.

In terms of bands, it will be a colourful mix of well-known names of the rock scenes big names like…

SEILER UND SPEER  is an Austrian band, composed of amazing comedian and actor Christopher Seiler and film producer Bernhard Speer,that formed in the year 2014!  Christopher Seiler, a comedian by trade, played his first cabaret performances and wanted to accompany them with music. “I lifted whoever needs the guitar and because Bernhard liked it so much that I thought it was so good that I had a pack, anyway.” This idea later gave rise to the formation “Seiler und Speer”. Initially, the two artists didn’t take their music seriously. Christopher Seiler: “I basically never take anything seriously. I take mi nedamoi söwa seriously, do samma de boa Liada a wuascht! ”Nevertheless – or perhaps because of that – the first pieces of music were fun. The single “Ham Kummst” shone with Austrian insult and one or two listeners found themselves in it. In the meantime, however, the fun project has turned into serious music. This can also be heard in the pieces and so their debut album shines with a mix of bitter romance, everyday comedy and street hits.

PAROV STELAR is the stage name of Marcus Füreder, born in Linz. Is an Austrian musician, composer, producer, DJ… and designer. The musical style of Parov is based on a combination of electro, hip hop, jazz, house and something like pop!    In Greece we are fan about PAROV STELAR  music is one of the most beloved artists and in all his amazing concerts in Greece is always sold out.

BULLET FOR MY VALENTINE-Bullet for My Valentine, often abbreviated as BFMV, are a Welsh heavy metal band from Bridgend, formed in 1998. The band consists on 4 members and 1 former member. The 4 members are: Matt Tuck, Michael Paget, Jamie Mathias and Michael Thomas and the former member, Nick Crandle. The upcoming seventh studio album by Welsh heavy metal band it will be released on 22 October 2021 through Spinefarm Records and was produced by Carl Bown.

MILLENCOLIN- Is a Swedish punk rock band, that was formed on 12 October 1992 by Nikola Sarcevic, Mathias Farm and Erik Ohlsson in Orebro, Sweden. In early 1993, drummer Fredrik Larzon joined the band. The band until now had released a very interesting discography  with 9 Studio albums ,2 Compilation albums,3 Video albums,1 Soundtrack albums, many videos and singles and 2 demos. The name of Millencolin  band is derived from the skateboard trick “melancholy”!

MANESKIN- Is the band from Italy, the Italian EUROVISION 2021 winners a rock band formed in Rome in 2016. The group’s line-up comprises Damiano David,Victoria De Angelis, Thomas Raggi and Ethan Torchio. Performing on the streets in the early days, the band rose to prominence after finishing second in the eleventh season of the
Italian talent show X Factor in 2007, in 2017, and international prominence when they won the Sanremo Music Festival 2021 and the Eurovision Song Contest 2021- as the Italian representatives in the latter – with the song Zitti e Buoni!

CLAWFINGER- Is a Swedish rock band. The group is known for aggressive but melodic music and tackling political and anti-racist themes in their songs. The band’s origin dates back to mid-1989, when Zak Tell and Jocke Skog met while working together at Rosenlund Hospital in Stockholm. In 1990, they were joined by the Norwegian guitarists Bård Torstensen and Erlend Ottem who were also working at the hospital. The four soon realized their similar interests in music. Bård and Erlend played previously in a band called Theo in their hometown Arendal in Norway. They invested their free time exploring the musical world, composing and writing songs while eventually evolving into a band.
JINJER-  Is the Ukrainian metalcore band from Donetsk, Ukraine. Jinjer was originally formed in 2009 by Maksym Fatullaiev (vocals), Dmitriy Oksen (rhythm guitar), and Vyacheslav Okhrimenko (drums). However, the band considers 2010 as its official year of formation when Tatiana Shmailyuk replaced Fatullaiev on vocals and Roman Ibramkhalilov was picked up for the lead guitar. Since their inception, the band has released three full-length albums, three EPs and one live album.

FLEKS – The alternative band from Austria founded in 2014! FLEKS have established themselves as a fixture in the Austrian music scene. With their very ambitious debut album, Color TV, mass hysteria and sold-out stadiums are, naturally, just around the corner. Mixing stoner and alternative with some good old punk attitude, FLEKS have become synonymous with a genre-crossing sound, delivered in high energy live shows.So far, FLEKS have played over 60 shows, at clubs and festivals within Austria and have shared the stage with several great names within the punk and metal scene such as Lagwagon, Sepultura and The Darkness.

RUSSKAJA Are a ska punk band from Vienna, Austria.The band calls its sound “Russian Turbo Polka Metal.” It has drawn on polka,ska,fanfare,pop,rock,and traditional Russian music. The band was founded in 2005 by former  Stahlhammer  vocalist Georgij Makazaria. Signed to the independent Austrian label Chat Chapeau since 2006, they later changed to Napalm Records.They are most known in Austria for being the stationary band of the late-night comedy show “Willkommen Österreich”.

Yes it is a big surprise because After the Nova Rock Festival in Burgenland that it fell victim to the corona pandemic this year, as in the previous year, the organizers now had an alternative program on offer The “Nova Rock Encore” will be held on September 11th as a one-day festival in the Wiener Neustadt stadium . So we shall all of you are waiting there for one more big festival. See you there and you must remember it!

SPECIAL NOTICE FOR ALL THE FOLLOWERS

From the webzine www.athenscalling.gr we shall continue our reports about NOVA ROCK ENCORE 2021 with many interviews and special reports!

But if you want it you can read any other news about, from main source and here is the link with all the news about the amazing NOVA ROCK ENCORE 2021.