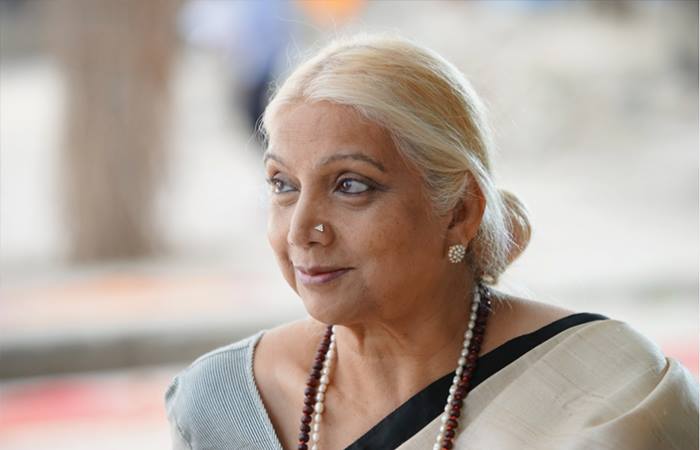 Asha Puthli is one of the most successful vocalists ever to come out of India. Jazz fans exalt her as a legend for her daredevil vocals on the Science Fiction album by free jazz iconoclast Ornette Coleman. But with ten solo albums under her belt for labels like EMI, CBS/Sony, and RCA, Asha is a cosmpolitan pioneer of jazz-inspired funk, soul and electronic dance music.

Trained in Indian classical singing and jazz improvising, Asha Puthli created her own unique sound in the 1970’s – soft, slinky, sexy, meditative, and chilled out. Captured on classic recordings like “Space Talk” and “Say Yes,” that distinctively cool sound prefigured the entire rise of acid jazz, ambient dance and neo-soul music. Today, as Asha Puthli prepares to release new material, her songs are being rediscovered by legions of hip-hop, neo-soul, nu-jazz, and electronica fans. Asha’s solo recordings have been produced by the likes of Del Newman, who produced Elton John’s “Goodbye Yellow Brick Road” and Teo Macero, who produced Miles Davis’ “Bitches Brew.” She has also produced and co-written many of her recognized hits. A quick glance at some of the artists with whom she has recorded, sung or shared the stage is a testament to her eclecticism: Alice Coltrane, Roy Ayers, Henry Threadgill, Grace Jones, Sonny Rollins, Charlie Haden, Michael Franti, Bill Laswell, Patti Smith, Don Cherry, Freddie Hubbard, And Django Reinhardt.

Asha is the free spirit of music, she is a legendary India artist a cosmopolitan pioneer of jazz, funk,soul and electronic dance music…she is a diamond are for ever!

Asha voice is all the genres…about the music!

Pandemic days and we send a mail to Asha, a request about an interview with her…after  a week we have ASHA replay …

Thank you for your request of an interview. It would be pleasure to be interviewed by you for Athens Calling. Shoot me the questions to my email at ashaputhli@gmail.com or to my manager at apmpmngr@gmail.

Stay well,happy,safe and creative through this challenging period for the world

I think that moment it was a great time for the webzine athenscalling.gr chatting with the free spirit of music … named ASHA PUTHLI from India!

Athenscalling.gr: Good Morning Asha…and all the best to you ! At first I must say to you that, You are the free spirit of the music! Welcome at Athenscalling.gr and many thanks for our chatting.

Athenscalling.gr: Well Pandemic and crazy days of Covid –19? Where are you now ?

Athenscalling.gr: You are a big painting of arts …Singer-Songwriter, Producer and Actress. Please tell us what do you love most of all?

ASHA PUTHLI: Singing because its the most natural thing for all human beings and everybody can sing! It touches the soul.

ASHA PUTHLI: Michael Vollbracht was a major talent, very original, I met him   in N.Y he designed many of the clothes for my Shows, I loved his scarves and you  could twist and turn them and wear them anyway you wished so it gave me a sense of freedom and allowed creativity. I have still kept the scarves because they are like paintings. They are ageless, you can see the black and white palm frond scarf in the last scene of movie ‘ SQUADRA ANTIGANGSTER’ . Also the scarf on the ‘GOBLIN’ Soundtrack album cover which shows you his fun side with monkeys & dragon flies painted on it & the stilettos are black Manolo Blahnik Both Micael and Manolo had a great sense of humour. I met Manolo in London just as our careers were taking off, he is fun and flamboyant, when we met he was also writing a column for Vogue magazine and was the first person to write about me in Vogue. Fortunately I have wonderful film and video showing their fun fabulous personalities which I cherish.

Athenscalling.gr: Something else in your carrier was photographed by Richard Avedon and Andy Warhol… Do you have something to say about it? ASHA PUTHLI:Andy was a good friend and we met often.Yes, he photographed me many times with his Polaroid and also included my photo in his book titled  ‘EXPOSURES’. Also some of the photos he took at my home are now at STANFORD UNIVERSITY LIBRARY and other archives. I did not realize how  much Andy liked my music even though he was the first to call me to he had heard my song on the radio! I only realized it recently when Whitney Museum had a major RETROSPECTIVE OF ANDY WARHOL’S WORK and there in hits 1973/74 time capsule of things he wished to remember was my first self titled  “ASHA PUTHLI” album along with his favourites like The Marcel Ducharcel  Duchamp’s Book, WILLIAM BURROUGHS BOOK, LOU REED’S ALBUM  LYRIC BOOK OF THE BEATLES and things he loved! Richard Avedon photographed me in his studio, are gallant did the make up and a photo from that session was used for the back cover of my 2nd solo 1974 CBS album titled  ΄΄SHE LOVES TO HEAR THE MUSIC ΄΄. We did not keep in touch after that but I do have some film from that session to remember it!

ASHA PUTHLI:Love all of its all music!

Athenscalling.gr: About your amazing debut self-titled album. Do you remember something very important from it?

ASHA PUTHLI: It was wonderful to work with producer Del Newman,what was important is that I learnt to be more disciplined in work. Though he may have found me a little eccentric. I used to gargle with Crystal Champagne, that’s what you hear in the opening of song ‘ I DIG LOVE’ that’s not the sound of a Bubble Hookah. Del had worked with some great musicians so I was a little intimidated when musicians like RINGO STARR and BERNIE TAUPIN who co wrote with  ELTON JOHN dropped by on our sessions. Wish I had instead drunk the champagne, it would have given me the cuts to request them to join in the recordings. Athenscalling.gr: … And your best song of the album?

ASHA PUTHLI: … “Neither one of us wants to say goodbye”, either one of us wants to say… goodbye, because I got to squeeze in just a little Bit of Indian classical vocals in subtle way, it is called ‘MURKHI’ a quick rolling of notes. The which I think is best is “Love” the JOHN LENNON song, love it for its simplicity and because I got a lot of comments from women saying they were moved to tears by this version .At that time my favourite recording was Pachelbel’s Canon in D Major and that is how I wanted the arrangement for the song.

Athenscalling.gr:Tell us about your preferences in the music. I mean about singers- band…also do you remember what was the first album you bought?

ASHA PUTHLI: My preferences in bands are from PINK FLOYD… to DEPECHE MODE. First album I bought was with ELVIS PRESLEY

Athenscalling.gr: I want ask you now about my country, about Greece do you know  something about the music or anything other?

ASHA PUTHLI: I’ve always loved GREEK MYTHOLOGY and visited Greece many years ago, love it and since then have been waiting to return there, love the traditional music… the Bouzouki, love the narrow streets and white washed homes of HYDRA, the beaches, the water paddling bicycles and the food, these are my memories and hope I can return someday to give a concert … maybe in a MONASTERY or in THE MAJESTIC LANDMARKS!

Athenscalling.gr: About your future plans?

ASHA PUTHLI: The new video of the French duet I recorded with GABRIEL GRILLOTTI , was released NOV. 20, 2020 .The cd release November 28th . Hope you enjoy the song ,it is a good one for the season of goodwill and love.

Athenscalling.gr: Thank you very much Asha about your interview, it was something great to talk with You. Till the end send please your message just around the world.

ASHA PUTHLI:Spread the love, light, laughter and music all around the world… Yassou!