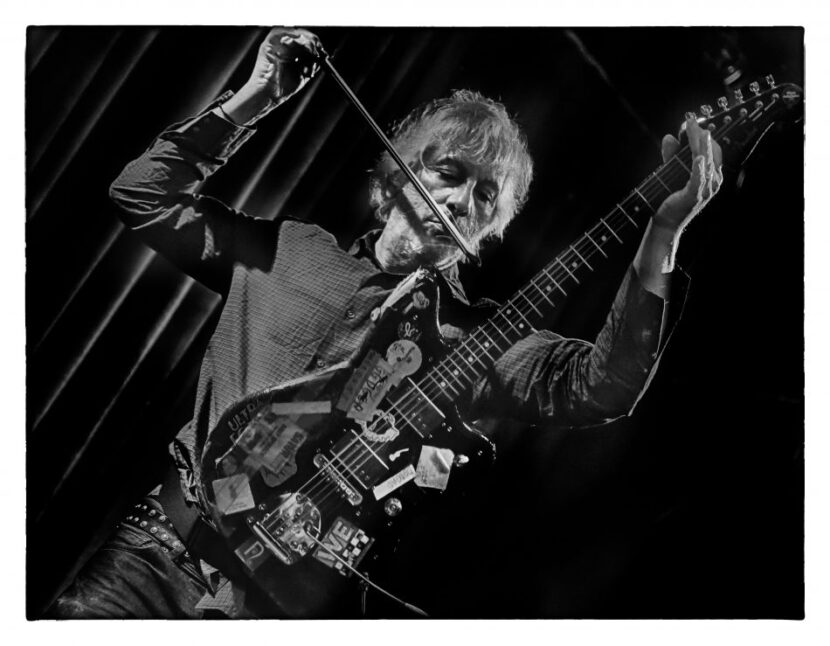 Lee Mark Ranaldo, is the name of the man … when the Art has a name! He is a great man of art!

Musician,Singer,Songwriter,Writer,Visual Artist, Record Producer and of course known to all, as co-founder in 1981 of the Amazing Alternative American Rock band… Sonic Youth!

It is worth noting that in 2004 Rolling Stone magazine ranked Ranaldo 33rd on its list of “Greatest Guitarists of All Time” and eight years later another music magazine, Spin, which now operates as a webzine, will publish a shortlist of 100 guitarists, where he places Ranaldo and Thurston Moore of Sonic Youth, together at No. 1!

In his discography, from 1983 until now in 2020 released  with Sonic Youth 15 albums, 15 collaborations (one with the Greek band Callas “Trouble and Desire” and  1 compilation, also 3 more singles and EPs and of course 13 solo albums, with the last one “Names of North End Women” collaborating with the Catalan, Raul Refree, released 18 days after his birthday, on February 21, 2020 … with a very promising future!

Lee Mark Ranaldo, on the occasion of the album “Names of North End Women” and his entire presence in the field of Arts, we searched the internet and talked to him, chatting a beautiful day in October!

Athenscalling.gr: Where are you now and how pass all the Pandemic crazy days of Covid –19?

LEE RANALDO: I’m in New York City. With the exception of a few weeks Spent in a small cabin in the woods of upstate New York, I’ve been here in the city with my family since early March, in isolation for the most part. I get out to ride my bicycle quite often a priority for me! with occasional (outdoor) visits with a very small circle of friends.
For much of this time both my recording studio and art studio have been shut down, across the river in Hoboken, New Jersey, so I’ve been left with what I can do at home in our loft. As I’d just completed an album which I worked on for most of the last year (Names of North End Women , with Raül Refree, February 2020) which was released just 2 weeks before our lock down, I was not inclined to begin immediately on writing new music.

In fact I did almost no music work at all for the first months of the pandemic,, possibly depressed, or confused as to how long this pandemic state would continue, I don’t know. Instead I did what I could in our home situation.
I spent much time drawing, and painting in watercolor, mundane objects at first, a bowl of fruit, and, mostly flowers in bloom, dying and dead flowers. Leah kept bringing them home to brighten our table, and I be gan drawing them regularly. I’ve not been tempted to draw flowers previously, and as I have always dabbled in watercolor, I set out to gain a better understanding of the medium. Beyond that, much reading, many books, and many films watched, and the completion of some writing assignments that had been long overdue.In the last few weeks I’ve started sketching out some new musical ideas, and opened up my art studio to continue work on the flower pictures over there.

Athenscalling.gr: I must say to you that it was a big surprise for me while watching in your Face book that you participate in Oklahoma Contemporary Arts Center’s live stream, reading the Homer’s Odyssey, from Emily Wilson’s recent translation, that weekend 21/08 on Saturday night ! Really what were your feelings at that moment?

LEE RANALDO: My participation in the Odyssey event came about through a couple recent Oklahoma contacts. I’d recently met one of the curators at the Oklahoma Contemporary Museum, which put on the event. We’ve been talking about doing something at some point, and they extended the gesture of including me among the 24 (>) readers each with one of the books of The Odyssey. In addition, I’ve spent some time at the new Bob Dylan Center in nearby Tulsa, Oklahoma I spent some time there examining the collection of Dylan artifacts and am writing an essay for the catalog they will produce when the Center opens to the public in 2021 or 2022. I’ve had some things drawing me to Oklahoma, and to Amarillo, Texas, which is only 5 hours, drive away, in the last year or two. It’s a very interesting part of the country.

Athenscalling.gr: And which of all the adventures of Odysseus would you like to live and why?

LEE RANALDO: I think the most fascinating of all Odysseus’ adventures is his return to his home. Something we are all looking for in some way? As someone who has had his share of adventures around the world, encounters with the gods and goddesses of music and art, history and science, I know the placid relief of returning to one’s roost at the end of the adventures.

Athenscalling.gr: Lee Ranaldo … singer and songwriter, great guitarist, visual artist, writer, producer etc. and I will ask you … What do you love most of all ?

LEE RANALDO: Most of all I love life, the road it takes, the new, unknown experiences which one chances upon along the way, and the people you meet there.

Athenscalling.gr: Let’s talk now about your last album, teams up with Catalan producer guitarist Raül Refree , ” Names of North End Women”. How did you come up with the title of this album?… And how much time did you need to prepare it?

LEE RANALDO: Raül and I live in separate cities he in Barcelona and I in New York. We came together multiple times over the last year, in both cities, to create the music and produce the album. A few of the songs reference Winnipeg, Manitoba where Leah is from. The title refers to a section of the town, the North End of Winnipeg, where many streets have the names of anonym ous women. Harriet, Gertrude, Dagmar, Ellen, Juno, etc. We were moving forward from our work together on my previous album, Electric Trim, creating the songs together (both of our names are on this album cover, and, like the last, some songs have lyric Contributions from author Jonathan Lethem) and trying to fuse a number of different styles together, to create something new. We used some high tech electronic equipment digital machines and also some low tech old fashioned things actual acoustic instruments, ancient gamelans, tape recorders, homemade instruments.Our working method is about experimenting in the studio, and on this record we went down some new and unexpected roads together.

Athenscalling.gr: And your best song from ” Names of North End Women”?

LEE RANALDO: Haha it’s never easy to ask a musician their ‘best song’ or ‘favorite album’ they are all our children! I have very strong feelings for many of the songs on this album. Perhaps the song “Words out of the Haze” points most clearly the way forward towards the next songs.

Athenscalling.gr: I want to tell also about the cover of the album, I think that it is very impressive. Tell us about its creation?

LEE RANALDO: The art on the front and back cover and the poster inside is all the work of artists Jesse Reeves and Bradley Kronz, taken from an exhibition in 2016 in Italy. I discovered Jesse’s work in the last few years sculpture, often inspired by or made from modified furniture elements. I think she’s doing some very great and innovative work, and we were very happy that she and Bradley agreed to let us use the images.

LEE RANALDO: As above the title references the many streets named after anonymous women (only first names) in the North End of Winnipeg, Canada.Walking the streets in the dead of the cold winter of 2018 inspired a small poem, a listing of the names, and became athematic jumping off point for lyrical ruminations on the various partners and friends that drift in and out of our lives across the years a loose framework that informed many of the lyrics.

Athenscalling.gr: Traveling in the past, tell us your favorite memory from the past and your bad memory in the year 2020 !

LEE RANALDO: Favorite memories from the past are too numerous to mention so many! I prefer these days to remain in the present as much as possible! 2020 was a year of historic memories. I can’t remember a recent year that caused me to spend so much time reassessing my own life and situation that that of the world at large. Many hardships for many this year, and thankfully my family and I have thus far been spared but I’ve used this isolated time to think hard about the present and the future, about what is important going forward and about what I would like to do going forward from this moment.

Athenscalling.gr: Tell us about your preferences in the music… and I will ask you what albums do you have in your bag … now?

Athenscalling.gr: Any plants for the future?

LEE RANALDO: I’m just starting to make music again,curious what will come next, I don’t think it will be rock and roll! I hope to reconnect with many of my collaborators, scattered far and wide, once things settle down, my friends in Athens ,The Callas ,among them! I will continue to work on the watercolors, and see what I can develop there. And cycling as much as possible!

Athenscalling.gr: Thank You Lee for your interview… All the best to you man!… and before the end please , give your message please to your fans in Greece.

LEE RANALDO: The message is stay strong! We are in historic times! There are sacrifices that must be made now(like wearing masks,following rules, etc). In order to insure our future comes as swiftly as possible! I believe this is a time to reconceive our possible future(s), individually and as a global community and make the changes that we desire